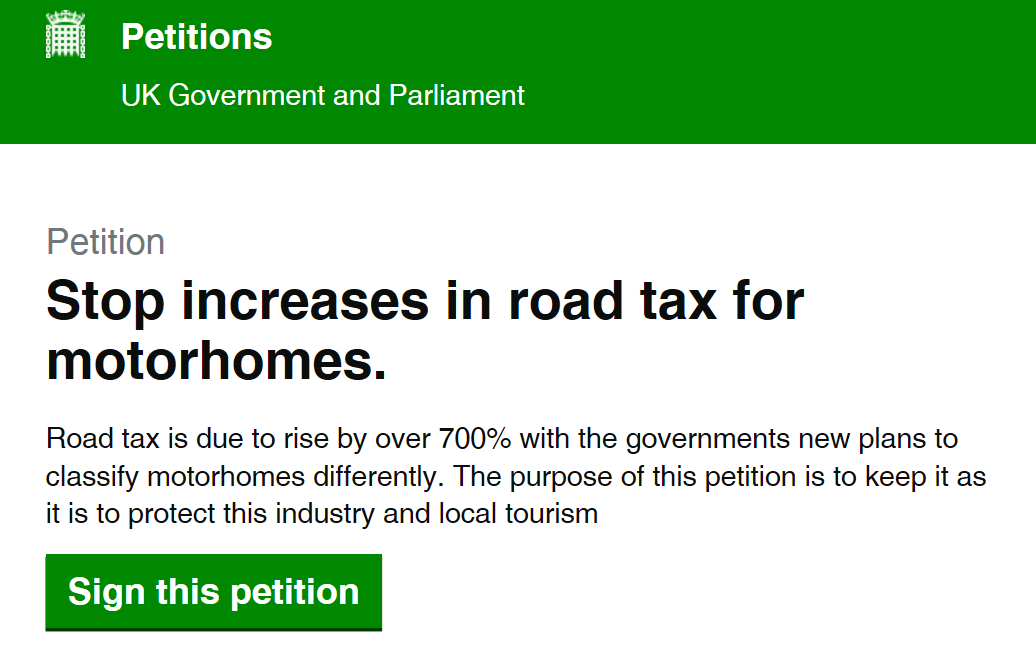 Click here to Stop increases in road tax for motorhomes

Dear GAVIN COX,
The Government has responded to the petition you signed – “Stop increases in road tax for motorhomes. ”.
Government responded:
Previously the tax system did not account for the CO2 emissions of most motorhomes. The government wants Vehicle Excise Duty to encourage the take-up of lower CO2 emissions vehicles.
Vehicle Excise Duty encourages the take-up of vehicles with low carbon dioxide (CO2) emissions to help meet our legally binding climate change targets. Transport is the largest sector for UK greenhouse gas emissions (27%), of which road transport accounts for over 90%.
From 1 September 2019, all Category M1 Special Purpose vehicles (M1SP), including motorhomes, must record the CO2 emissions and fuel consumption on their type approval certificate. Apart from a small number of end-of-series derogations, all new registrations of M1SP vehicles must comply.
It is right that vehicles with high CO2 emissions pay greater first year VED than those with lower emissions. Only motorhomes with the very highest emissions will fall into the highest tax band and only brand-new vehicles are impacted.
Budget 2015 announced a reformed VED system which was introduced for light passenger vehicles, including motorhomes, with a recorded CO2 emissions figure from 1 April 2017. Therefore, industry and consumers have had significant time to prepare for these changes.
Whilst the Government recognises the concerns of the leisure industry, tax is only one of many factors impacting purchasing decisions.
Like all taxes, the Government is keeping the VED treatment of motorhomes under review. Any changes will be considered by the Chancellor and announced at fiscal events.
HM Treasury
Click this link to view the response online:
https://petition.parliament.uk/petitions/268246?reveal_response=yes
The Petitions Committee will take a look at this petition and its response. They can press the government for action and gather evidence. If this petition reaches 100,000 signatures, the Committee will consider it for a debate.
The Committee is made up of 11 MPs, from political parties in government and in opposition. It is entirely independent of the Government. Find out more about the Committee: https://petition.parliament.uk/help#petitions-committee
Thanks,
The Petitions team
UK Government and Parliament

Any cookies that may not be particularly necessary for the website to function and is used specifically to collect user personal data via analytics, ads, other embedded contents are termed as non-necessary cookies. It is mandatory to gain your consent to enable these cookies and store them on your browser.